March resulted in a total of 5 Dirty Bombs being dropped Why tho? 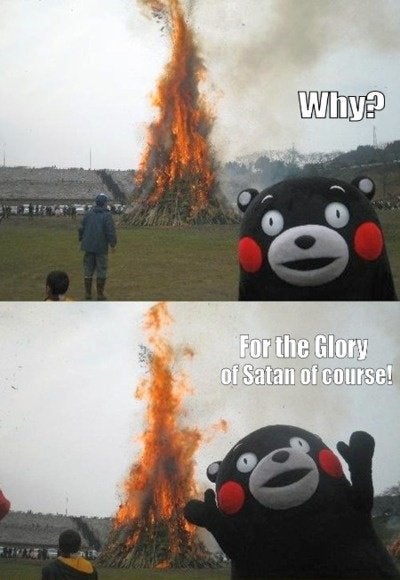 Hcom3 Actually quit a Year ago, He only came back for Elimination 2020 where he lead Karma Farmers to Top 4 then went dark again till… he finally decided to login 2 weeks ago and call it quits once and for all. He decided to run a giveaway and kept doing RR Matches till he finally won enough to buy a Dirty Bomb.

I was bored really. I doubled up in RR once and someone told me that if I did it once more, I could buy a DB. I just said “fuck it”. Got lucky, got a bomb, and here we are.

When I was just starting the RR games, looking to double up so I could buy the DB, I was wanting to bomb cheds faction. It would have been really dumb, and pointless as he can just change the respect values himself. However I decided closer to the bomb detonation point that I wanted it to be an actual faction. In the end I was considering doing IBB, or SA. I chose SA mainly because they have already been DBed, and it would have been really funny for them to get hit… again. I wanted this to be special, and PrincessJulie jokingly came up with the idea that I make a thread when I plant it that I am bombing NS II. It would be pretty unexpected and when the actual bomb happened it would be pretty fucking funny. So I went with that. I not so patiently waited for the bomb to prime, waited some more for a friend to fly and planted. I made the thread, and here we are today :)

Obviously this was a troll, I wanted to make this thread as PJ gave me its great idea. The actual Bomb was on SA as you can now tell.It was kinda hard picking between IBB and this, but I think this was funnier. -Hcom3 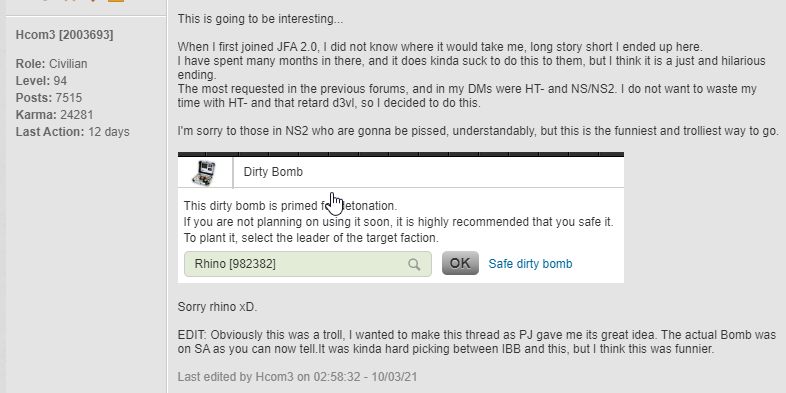 oh well, anyways you can find an excerpt below

Don’t be lazy, the biggest hinderance to my further success was my lack of motivation at times, putting in a lot of effort goes a long way. This game is a massive daily grind. The simple shit adds up. You don’t have to spend 16 hours a day trading or whatever but there is a ton you can do in a 15 minute per day window. Xanax, train, do a few crimes, racing, use a bit of booster space. The small shit like that will add up over weeks, months, years. Trust me when I say if you don’t do some stuff, it will bite you back in the future. Newer players, read guides, absorb information, join factions to help you out. Knowing what you are doing from the start will propel you into the game faster, and allow you to get ahead. Somewhat ties into the 2nd point, but finding a good faction for you is really important. Specials that factions give can be an immense support and will help you out a ton long term, not to mention you can find some really amazing and fun people on this game. And if you don’t think your current faction is working out, there are always more to try out. Gonna be a stereotypical response in this last point, but make sure you are having fun. If your current play style is not working out, you might want to consider changing it. It may not seem like it at times but there really are so many different ways to play this game. Not everyone is suited for every style.

Bling_Bling a famed Dual Bushmasters collector (unfortunate for him he won’t be known by this anymore) was caught 2 Months ago Collecting Nudes. 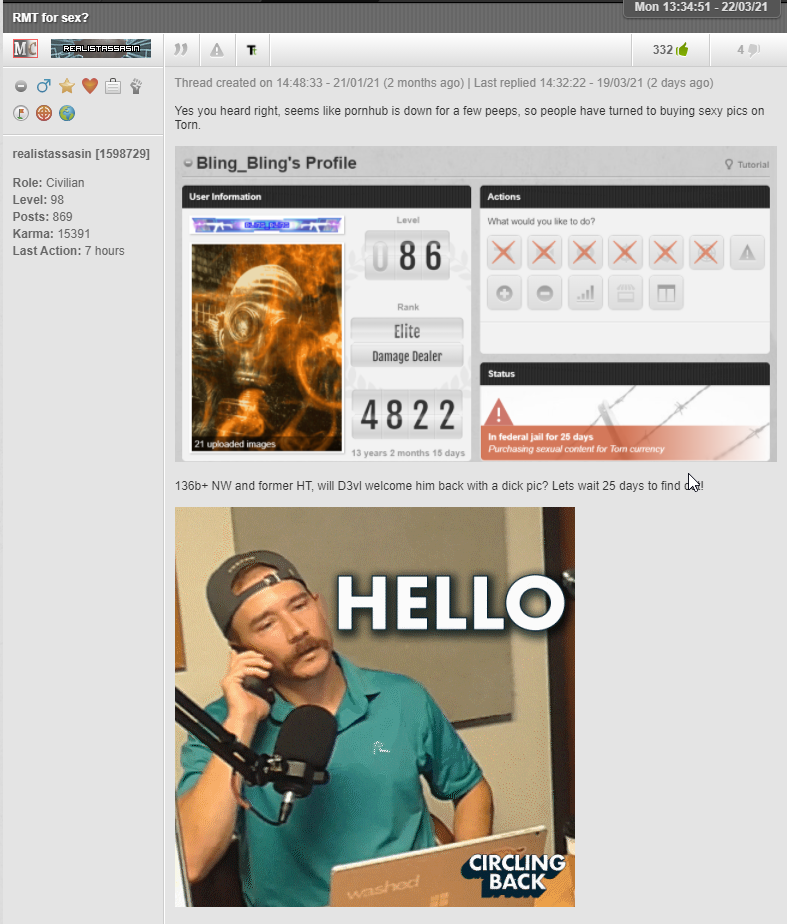 According to his latest forum thread, upon returning to Torn from the Forbidden Jail he claims he was unfairly treated by the community manager and wanted to spend his entire networth on a target, that target Turned out to be MnC who has suffered 3 Dirty Bombs so far. Apparently BlingBling is also a professional Power Point Presentation creator, you can read his side below. BlingBling dropped the 2nd 4th and 5th Dirty Bombs of March 2021. 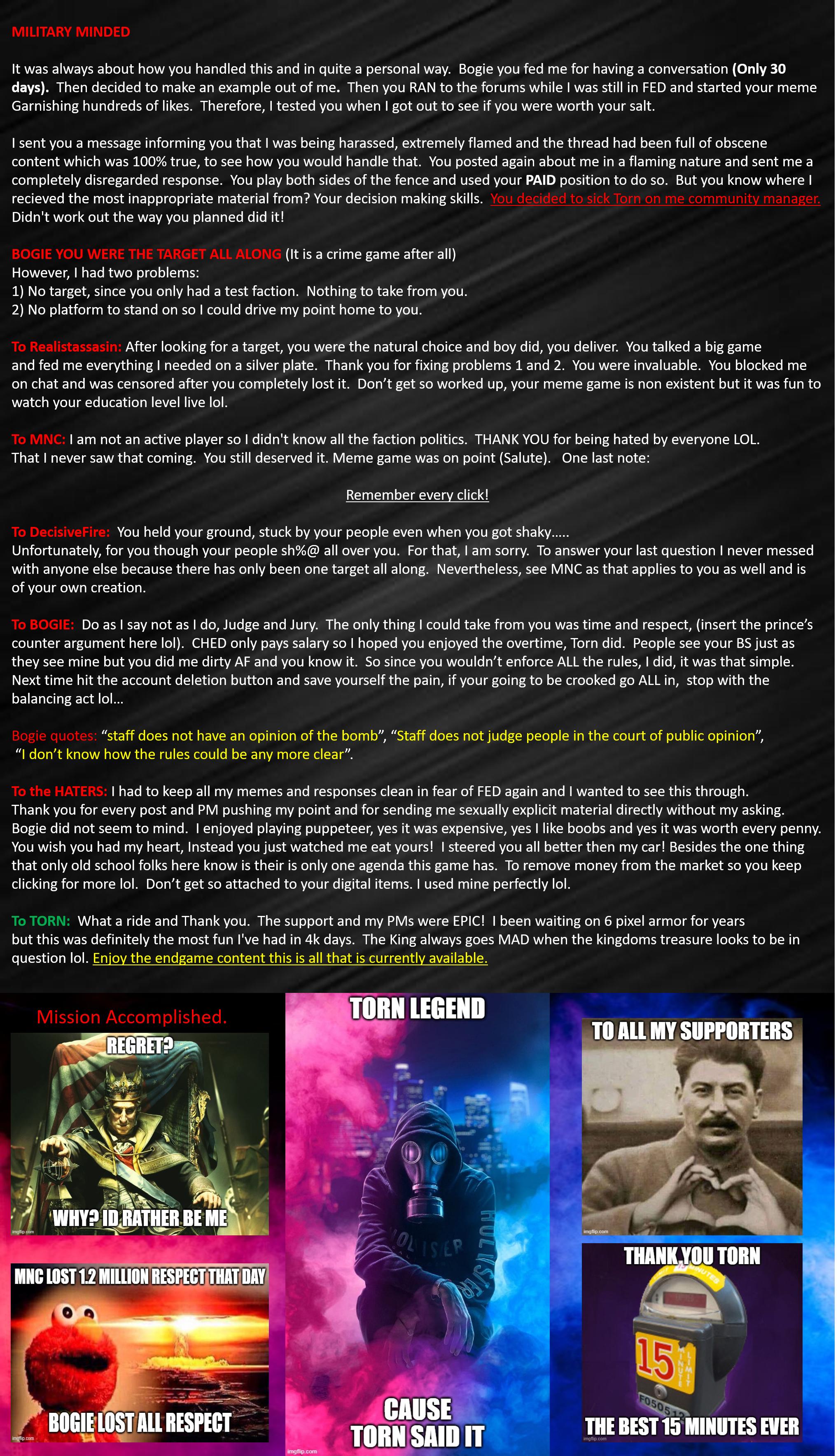 Your dirty bomb has detonated, injuring 486 citizens and severely damaging Mentos and Cola,decreasing its respect by 438,612 to 6,601,549.

In Total Mentos and Cola lost 1,290,020 Respect to 3 Dirty Bombs dropped by Bling_Bling

Finishing Thoughts can be summed up by a single Euphoria post,

Right after Bling_Bling dropped their first bomb, while he and few others that offer “bomb drop” services were offline we saw a nuclear cloud

The bomb detonated at Natural Selection HQ. The suspected bomber acccording to the forums is Miro Leader of Subversive Alliance rumored to have dropped the bomb as retaliation for the Hcom3 bomb. However these are only rumors for now since there’s no official confirmation as of yet. 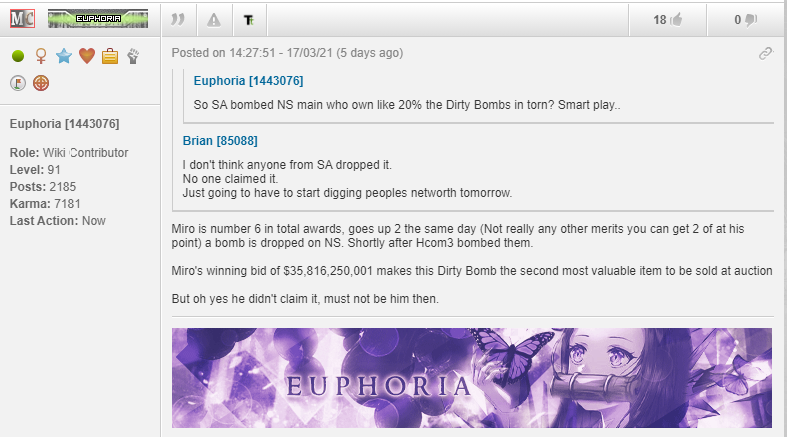 Curious Minds are welcome to view this spreadsheet by Boo feel free to help make additions by dropping your bomb.

If you’d like to read more articles, go here.

If you have an idea for an article in mind, join TornHub Discord and post in #article-suggestion channel or PM ORAN in-game.

Learn more about TornHub here. Also, now you can actually keep track of our article releases via Discord in your own server by following #article-release channel there. If you need help with doing that, please post on the #general channel and someone will help you out. See you at our next article!

What were the Developers focused on for November?