— In The Yesterday’s issue we left an Easter egg too, but I assure you this one has none. we plan on hiding Easter eggs perhaps once every 3 - 4 forum news article and the first one to spot them wins the mega prize of 2 Xanax (we do have plans to increase this).

Aparently for some users TORN was down for a bit. Resident Bogie sent this out in Torn Discord Server

Hi guys - sorry if you received 522 errors, this wasn’t an issue on Torn’s side unfortunately so not much we could do about that, this was an issue on Cloudflare - a 522 error can occur when they detect a lot of suspicious activity in a particular location so as a result they throttle traffic, it is just temporary though and doesn’t take long to go away.

In honor of this week’s National Funny Bounty Reason Week, put a bounty on someone and enter a funny reason. (keep it all within Torn rules, of course)

MrNewOrleans Created a Discussion thread on “Baldr’s ratio, Hank’s Ratio or Even Stats”

tenatic was wondering when to remove merits from Education

I think it would ruin the demeanor of Torn.
We get mini games in things like Christmas town.
It’s a nice change of pace while still allowing for full normal torn play. It’s like a treat we don’t need every day.
The staff and players also put on large/small competitions some of these are torn based, bringing the community together over literally almost nothing but a picture and a task.
Mini games in torn (esp if they gave prizes) would be OP if they were all the time playable, and wouldn’t follow the games general “once per day get something nice or something small” routine with things like getting your daily 100 items, or spinning the wheel once, refilling once a day pattern.
If they ever were implemented they would have to be a per say token system to cut down on hungry people that would sit for hours on the mini games instead of playing the actual game.
But mainly, we don’t need/want Candycrush to keep us company in hospital after getting punched by Leslie. We need some morphine and a xan, so we are ready in 4 hours when we have another chance at clicking to hosp him for a tank top.

Spicy_Onta was wondering if SSL was really “that” Bad

Wall_st released their Public Apology to 3B

hello lilypop and all parties involved in BBB, I would like to publicly apologize for my behavior and my attacking against you and your faction. I would like to offer this apology, as well as a NAP towards beavers. I will also like to affirm that I will never declare a war against beavers ever again. As a demonstration that I am serious about my apology I have removed all text from my OP and I have changed the tittle to “please grave”. Please accept my public apology. 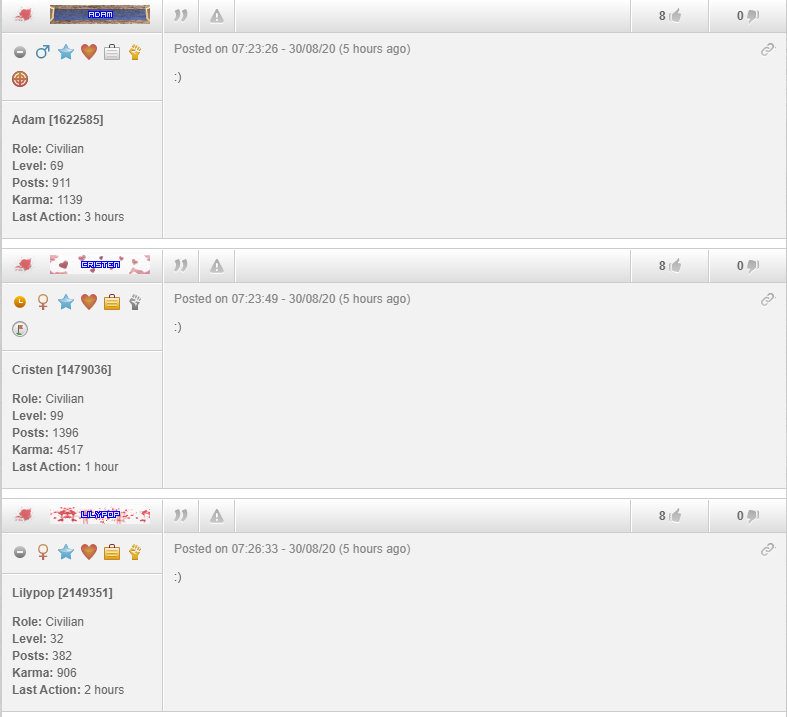 Wall_st was also commended by MeanMike for resolving the issue

Meh… I know busting Walls chops is the “in thing” to do, but I commend him for putting his crew before his ego and doing what he had to do to end this war and get his team back on track. When you lead a faction, you gotta make the hard calls and put others before yourself…thats what Wall did here. B3 is happy with how it worked out, Wall is happy that he gets to keep his buddy in the faction.. hell, everyone wins. So, give him shit if ya wanna, but in the end, he did what he had to do, to get what he wanted to get. Good work, Wall.

NOVA Join CR B Team aka Catalysis Nova was previously a member of the NUKE Family. here’s what the ZOMB13 says

Top 100 stats and still below that glass ceiling :( Wonder if he can recruit 100b stats to CR? is CR B now the best faction in the game? Is Nova still a buffoon?

Here’s what NOVA has to say

All jokes aside, I have been trying to join a competitive Faction for the last year now, so to finally be allowed that opportunity in one of the biggest Faction families in Torn means a lot to me. I’m aware I still have a long way to go in order to regain the trust and respect of both the player base and leadership of the Faction, but I hope that over time I’ll be able to achieve that and be an asset to the Faction.

Today’s Forum news was Brought to you by The TornHub Project go read more about it here
Just FYI: We’ve made our discord a “community discord” so you can follow the #Articles-Release channel into your own server or a channel that you manage so you can keep up with the news and articles daily, if you need Help setting it up feel free to PM ORAN in torn or Discord.*

If you wish to Discuss anything use this thread

Why is WAR empty Again? Who's Raiding Who?